This episode of Real housewives ATL was hellaaa good but I didn’t feel like I got some new tea.Cynthia got her titties check and they are good. I didn’t understand why she needed all of the women to be there. One or two girlfriends is fine but more than that it’s a crowd. But I guess, we should be thankful she did it that way because Kandi was there to spill Phaedra’s sweet tea. She said that her ex-best friend was not heartbroken to see Apollo go since she was dating and planning to marry another guy once he went asunder. The ladies were feeling like this tea was pipping hot but didn’t we know about this already ?… A while back, Phaedra was accused to be having an affair with Mr. Chocolate. But I guess this information coming from an ex-best friend make us feel like it’s a confirmation. Now  from our glass houses ,we can throw stones at miss Phae Phae.

As soon as Phaedra heard that Kandi was spilling her tea, she decided to spill Kandi’s. Phaedra is claiming that Shamea is  Kandi’s lover, mistress, girlfriend whatever you want to call it ! Phae-Phae went as far to say, Todd also gets some Shamea from time to time because they do threesomes. The only thing that is a bit confusing is the fact that Shamea is married. Yes two girls fucking fits the male fantasy but no man likes to know that another man gets to fuck his wife on the regular… anyways Kandi enjoying the kitty cat ain’t news to me. Didn’t she have a little something with Porsha ? Hmmm. Ms Williams is acting as if she knows a few things but since she’s been participating she can’t say a word.

Honestly, Kandi and Phaedra need to end their beef but in order for it to happen Phae Phae needs to be real. Often what happens with Phaedra is she says everything is fine but then she shit-talks Kandi behind her back. And of course, she has no problem hugging and kissing her old friend as if nothing happened. I think that’s what aggravates Kandi, she hates dealing with cameleons. As for Phaedra, she’s more about public image. 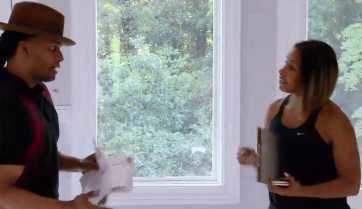 Now on to lighter things, Sheree is about to stick it to Kenya. Château Sheree is being furnished and of course there will be a party once it is ready. Kenya is going to regret starting that competition. Maybe I’m talking too fast, I need that château to be really done cause we never know with Sheree. Did she call the plumber ?