It’s very easy to look at Julian as the bad guy but Alexis did play her part. If she was not a great lawyer to her mobster baby daddy maybe she’d deserve a pass. Granted, she no longer represents Sonny but she knows what his life has been like and what it did to his wives and children. You don’t leave the mob whenever you want without paying the price. Sonny has tried many times and failed that’s why he is still in the mob. Unlike Sonny, Julian was born into the mob so to think he’d leave the only way of life he has ever known without ever wanting to go back to it is just foolish. Love is powerful but Alexis expectations of Julian were ridiculous. He was in the mob more than 30 years, he made enemies and the past always catches with you that’s if, if it’s not your sister. Clearly, Alexis did not think of Ava who shares a good relationship with Julian. If Ava had died by the hands of an ennemy wouldn’t Julian try to get revenge ? This is what he was taught! Someone hurts you, you hurt them back. So going against that would be going against his nature or the voice in his head… 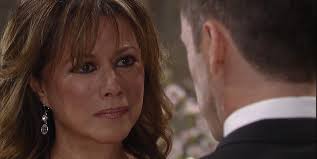 Not to put only the blame on Alexis but she has had enough experience  to know allowing herself to be involved with Julian would be a bad idea. She made those mistakes  in her young years, no need to repeat them in your fifties. There was only two options to choose from: accept this man for the person that he is and be prepared for the consequences of leading that kind of life or let him go completely and move on. Instead picking one of these options, she picked the one that was not on the table which was changing him for the better . It backfired since he reverted back to his true self. Once he got back to being Julian the killer she fell out of love but technically that’s exactly who she fell for in the beginning.

What inspired the Julexis NOT real love title was Anna’s speech to Julian.Apparently, Anna and some other people believe Sonny is better than Julian.  From Anna’s perspective Duke and Sonny truly loved their partners because they have or would’ve exchange places if their loved ones faced prison time for a crime they’ve committed. As much as it was selfish of Julian to want Alexis to go to trial, It was logical. Alexis had a better shot at getting off. There’s no witness that saw her at the crime scene, the murder weapon has her fingerprints on it because it’s hers which doesn’t prove she commited any crime and she is a respectable lawyer being represented by one of the greatest lawyers of all aka Diane Miller.Now, granted a loving husband shouldn’t want his wife to take that kind of risk but should a loving wife want her husband to confess knowing perfectly this would mean guaranteed prison time? Since Anna is comparing Sonny with Julian, why not compare Alexis with Carly ? Carly accepts Sonny for who he is and loves him so much she would take the risk of prison for him. This woman is the real definition of a mob wife, she doesn’t snitch and she stands by her man.

Honestly, Alexis cannot be blame for not wanting to spend years behind prison for her husband. But it’s weird that given the opportunity she had been given which was Julian and her getting away with it scott-free she didn’t take it. When Julian stole that dagger back from the evidence room, Alexis could’ve taken off her wire or maybe warned Julian doing so the cops wouldn’t have no leg to stand on. If they were so in love how come they don’t try to protect each other ? Is love a switch ?

As mentionned before Alexis cannot be blamed for not wanting to go to trial but Julian shouldn’t be seen as the devil for not wanting to confess so he could save his wife . It goes against every instinct to do things that would be detrimental to yourself. Anna’s definition of love is beautiful. Maybe Julian should want to protect his wife at all cost but Alexis should want to do the same. It means Julian fighting Alexis and saying ” Baby, I am going to confess. I can’t let you go through all this” and to that Alexis would answer: ” Me going to trial is our best shot. If you confess you’ll spend years in prison. I don’t want to lose you.” That’s not what’s happening. They are both thinking of themselves.

It’s even ironic how Alexis stabbed her husband in the back but couldn’t take responsibility for it. She will let Sonny take the fall for what she did and all she gives Sonny is a Thank You.. 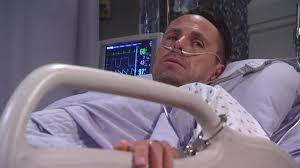 The message is Alexis is a fragile respectable woman but Sonny is a mobster so one more “accident” on his rap sheet won’t bother him too much.It might be true but fact still remains she let someone lie for her which is what Julian was hoping she would do for him.

Do you think Julian and Alexis truly love each other and is Sonny better than Julian ?