For quite awhile there’s been a rumor about Fifth Harmony breaking up.  Camila seemed to have wanted a solo career. She’s had a single with Shawn Mendes and right now she gets more solos in 5H songs. When there’s smoke there’s fire. 5H fans tried to figure what was the cause of the near break-up. They are blaming Normani. This girl has been going through it. It’s not hurting just her but her family too especially her mama. Friday, she decided to put out statement.

Things were still bad so Normani quit Twitter. Meanwhile her bandmates didn’t say much to defend her  from the accusations made against her. But after she posted her first statement, Camila said something to the effect of “I don’t  tolerate discrimation, racisim and you don’t have to hate on somebody to support me”. We know who she’s talking about but she’s still not fully standing behind Normani. The reason why Camila stepping in would be important is because of the rumor of her beefing with Normani. The fact that she is not denying that there’s any behind-the-scenes drama kinda make some people’s heads tilt. Luckily Mani’s other bandmates came to the rescue and wrote what seems to be heartfelt statements. 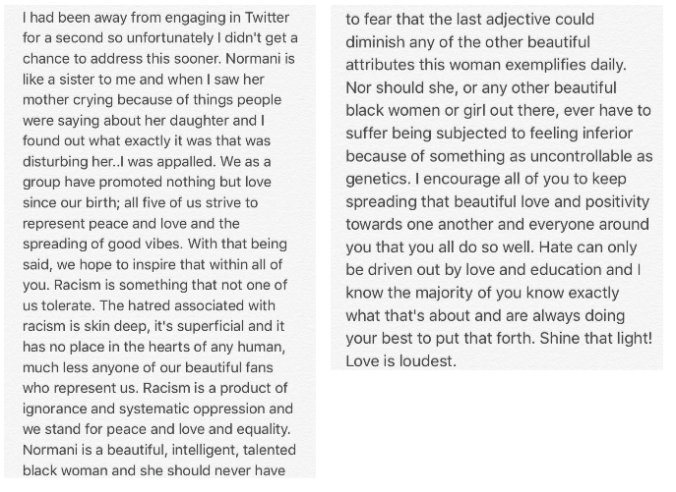 But did this come a bit too late ?

None of them had anything to say for a while and then at the same time they ALL decide to tweet about the situation. They don’t deny anything, they just focus on the bullying and the negative comments Normani’s has received. Lauren saying she was out of twitter for a second…The day Mani’s issued her statement is the day Lauren posted about her lipstick.  She knew what was going on, she was just waiting to figure out if she was gonna say something or/and what she was gonna say. They have managers handling the social media and their career period. And if they are truly close then Normani probably talked to them about what she was facing. They waited made sure they would look good and not give out any information.

Hopefully, the group will remain together and Mani will get back to tweeting without being harrassed. It’s quite unfair that she’s blamed for a possible break-up when she’s probably not the one being encouraged into a solo career. Not to say that Camila is but she is loved by the public because of the uniqueness of her voice so….wouldn’t it be fair to believe that Camila is the one who wants to take a leap and run after her glory ? Groups are never meant to last anyways look at the Supremes, Destiny’s child, N’sync and etc. Fifth Harmony is on it’s way to breaking up, no need to attack anyone.

This is how it goes.