After endorsing events like the Lyfe festival or being accused of stealing people’s designs, the Kardashians/Jenners are back in the news. This time Kendall and Kylie Jenner have used Tupac and Notorious Big’s faces by putting them on tee-shirts. They did that without even looking for their estate’s permission. Basically, they wanted to use those DEAD rappers’ likeness to make money. Voletta Wallace, Biggie’s mom decided to write an instragram post to let people know what’s going.

She said the following:

“I am not sure who told @kyliejenner and @kendalljenner that they had the right to do this.  The disrespect of these girls to not even reach out to me or anyone connected to the estate baffles me.  I have no idea why they feel they can exploit the deaths of 2pac and my Son Christopher to sell a t-shirt.  This is disrespectful , disgusting, and exploitation at its worst!!!” 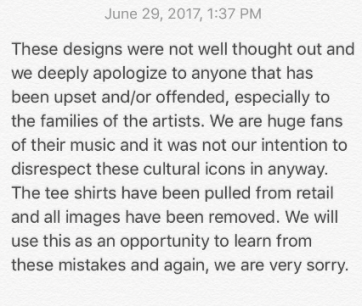 This is not the Jenners first mistake or the last.It’s funny how they are filthy rich but still would put out not “well thought out” designs so they can get a quick buck. They have a whole team to think for them how come all these people on payroll let that ish go ?…Luckily they’ve done well with that apology.