Has there been foul play ? As you all know Mishael Morgan who plays the role of Hilary Curtis is leaving the show . Some Y&R fans have been vocal about wanting her to stay since  TV source magazine interviewed Mishael Morgan’s agent David Ritchie.  He was clear Mishael Morgan wants to stay on the show just not under those conditions. The actress cannot see herself signing AGAIN the contract she signed when she first started the show. It appears that she has never had a raise since she debuted her role as Hilary. It’s insane when you think of how popular Hilary has been.

“If the network or studio is not willing to pay market rate, then you’re going to want something else in return for that. It all starts with finances essentially, and they were not prepared to give her a raise. So, it would mean that she worked for five years with no increase.” – David Ritchie

In the interview, David Ritchie went on to explain how negotiations usually go down and why he thinks it’s been hard to reach an agreement.  In his opinion, the challenges of negotiating contracts on Y&R are due to the fact that the show is owned by Sony. He also represents Jacqueline Maciness-Wood and has a much  easier time negotiating with the bold and the beautiful. While it’s true that Sony is a factor, we have to take into account the actresses’ position in their respective show. JMW’s character, Steffy is part of B&B’s main family, the Forrester. In addition to that she is valued by her boss because she’s suppose to be the Future of the bold and the beautiful, she’s the next generation. The bold and the beautiful is litteraly centered around her. 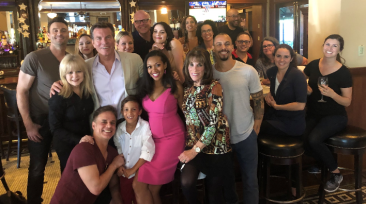 The answers might be in her last picture with the cast. If you look at Mishael, she looks like she has a baby bump. Now, we know her character is barely showing. Plus all of the actors seem to be dressed with their own clothes. Christian Leblanc aka Michael Baldwin and Billionnaire Devon are clearly not wearing a suit.

In other pictures, Mishael is wearing non-fitting clothes and is always hiding her belly with a basket of fruits or she has her leg up. As much as it is disgusting, you can’t help asking yourself this question: if she is pregnant ain’t it the reason why she doesn’t have a job right now ? It would be nuts if it is because not long ago Mishael popped a baby out and came right back to work with a bikini body. Obviously, she should not be pressured to come back to work and look like a model when her  body has done an amazing thing which is give life. But one other thing that needs to be considered when it comes to Mishael’s departure maybe this had to do with another actor more specifically Kristoff St-John.

Regardless of who is to blame, we can all understand Mishael’s decision. No one in their right mind would accept to have gone half of a decade without a raise and no possibility to have projects on the side. It’s sad to see talent to be wasted to make place to new characters that have not proven themselves yet.  Nathan Hastings, Olivia’s son is in Genoa City let’s hope he doesn’t end up  “here then gone” like Jordan.

3 thoughts on “Young and Restless: Discrimination against Mishael Morgan ?”